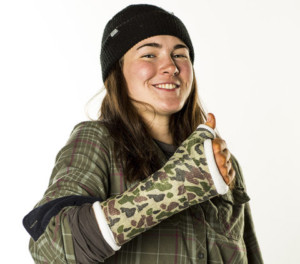 What do you do when you break your wrist just days before making your Dew Tour debut? You opt for surgery and power on! That is exactly what Anna Valentine is doing.

Valentine is coming off of an incredible breakout season. Following a silver medal in the world junior championships, Valentine earned the USASA national championship title in women’s snowboard halfpipe. The stellar season ultimately culminated with her being named to the U.S. Snowboarding rookie team.

However, Valentine caught the crew at Dew Tour off guard when she registered on site with a hard cast and a freshly broken wrist. Considering she had broken her scaphoid on December 2nd and underwent surgery on the 6th, Dew Tour had to pull her aside to get the status and complete update on her fresh injury.